Ornua Deutschland is located in Neukirchen-Vluyn and is responsible for the packing and distribution of butter, butter spreads and cheese to all leading retailers in both Germany and Austria. Kerrygold butter was first launched in Germany in 1973, reaching national distribution by 1982.

Ornua Deutschland recently completed its third expansion which extended the production and storage facilities in addition to developing enhanced office space to facilitate the growing popularity of the Kerrygold brand in Germany.

Kerrygold is the No. 1 butter brand in Germany, selling 100’s of million packets each year and is the brand leader for butter, spreads and cheddar cheese.

Synonymous with Ireland, the Kerrygold brand is listed in the top 10 of all Fast-Moving Consumer Goods (FMCG) products in Germany – so popular with the locals, it has a street named after it; ‘Kerrygold Strasse’! 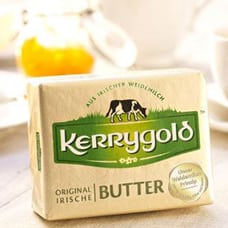 Kerrygold Butter, made from the milk of grass-fed cows, is the No. 1 butter brand in Germany and is available in salted, unsalted and spreadable formats.

For a full list of our current vacancies, please visit our main Careers page